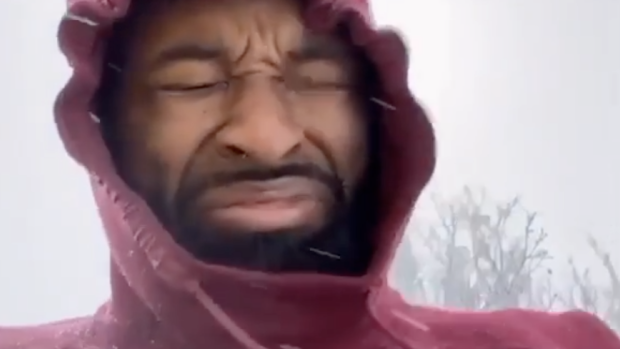 Ah, the first snowfall of winter. It’s usually pretty magical and an absolute sight to see if you’re keen on winter festivities, but then from there, the snow can become a burden especially if you have to drive in it.

Well, our friends south of the border in Ohio know the feeling.

On Tuesday morning, multiple players on the Cleveland Browns posted their reactions onto social media of the winter storm that hit Northeast Ohio overnight and left them with over eight inches of snow.

Starting with Browns star WR Jarvis Landry who posted this emotion-filled story to Instagram and to be honest, we’ve been there and know the feeling.

The crew down in Cleveland received eight inches of snow overnight and for some of the new guys on the squad, let’s just say they were given a rude awakening courtesy of mother nature.

Browns safety and Florida native Ronnie Harrison started his day by clearing his truck while CB Greedy Williams recorded and laughed from his car across the street.

Unfortunately for CB AJ Green and WR Khadarel Hodge, they weren’t able to have as light-hearted a morning as their teammates.

While driving on the snow-packed highway, Green’ Mercedes got stuck. Oh boy, have we been there.

We’re not sure if he was given the heads up or knew there would be a snowfall but we hope he’s invested in some snow tires for the rest of the season.

Looks like #Browns CB AJ Green also had some issues this morning pic.twitter.com/66eep4Jggd

The best part of all of this is that while Hodge was experiencing similar car issues, he took to Twitter to warn residents of Cleveland that if they saw him, to just go around and pass him.

If you see me on the road today

An athlete giving a PSA on their driving speed may be one of our new favourite things. Especially since he wasn’t lying.

At the end of the day, we just hope that everyone was able to drive safely and invested in some snow tires because, boy is that Cleveland weather a trip.