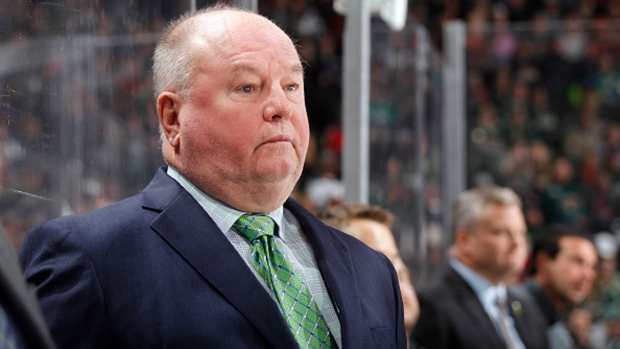 Clinging onto the final Wild Card position in the Western Conference with three clubs breathing down their necks within two points of their total of 47, the Minnesota Wild are in a dogfight to qualify for the post-season.

The team's effort against the Detroit Red Wings on Saturday night didn't them any favours as they fell 5-2 and were outshot 29-7 in the final two periods of action.

Speaking to reporters following the disappointing effort, head coach Bruce Boudreau didn't hold back his thoughts on his team's performance.

"That was the worst game that we've played since I've been here as a coach," Boudreau told reporters.

"Effort, compete, I don't know where it was. I don't know if they're still tired from this road trip or what have you, but I'm really disappointed in tonight's effort."

"If your best players aren't your best players, you're not going to win a game. It's as simple as that. When I looked down and Ek's line is the best line that we have out there, then we're in trouble." — Bruce Boudreau after #DETvsMIN pic.twitter.com/0J7WGFCmmz

Boudreau got even more direct with his criticisms, as he called out all his forwards minus Joel Eriksson-Ek's line with J.T. Brown and Marcus Foligno.

Boudreau candidly when asked about guys like Staal and Granlund: “If your best players aren’t your best players, you’re not going to win a game. It’s as simple as that. When I look down and Ek’s line is the best line that we have out there, then we’re in trouble.”

Boudreau: "You’re looking up at the scoreboard and every team you want to lose is losing and you just throw a clunker in there. It’s very disappointing"

The Wild have a 22-19-3 record and would've supplanted the Avalanche had they grabbed the two points. They'll look to get back in the winning books when they take on the Philadelphia Flyers and Los Angeles Kings in back-to-back games, two clubs that sit in the bottom of their respective conferences starting on Monday night.