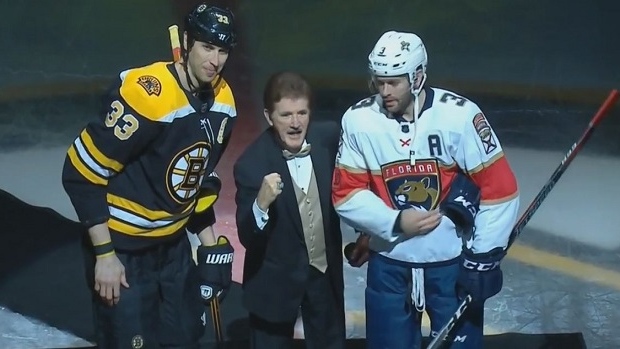 Rene Rancourt is one of the most legendary anthem singers in the history of sports, but next year we’ll see a different person belting out the national anthems ahead of the Boston Bruins’ home games as Rancourt is calling it a career after 42 years as the team’s anthem singer.

While the 78-year-old will most likely be singing the national anthems ahead of the Bruins’ home playoff games, the team wanted to do something special for him ahead of his final regular season game as the team’s anthem singer on Sunday night and he got an incredible ovation from the crowd from the minute he stepped onto the ice to the minute he walked off.

Rancourt was known for getting the crowd extra pumped up for the game by capping things off with his legendary fist-pump, so you know he was going to deliver one final one during the regular season on Sunday night. On top of the anthem, the legendary anthem singer also got to drop the puck for the ceremonial faceoff before the game.

Congrats Rene Rancourt on 42 years of singing the anthem! The Garden Legend sang tonight for his last (regular season) game!

Whoever takes his place next season is going to have some really big shoes to fill.