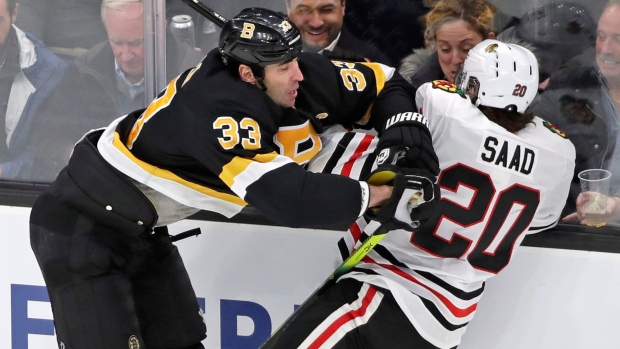 The Boston Bruins are rolling this season, sitting in pole position atop the Atlantic Division and second only to the Washington Capitals in the leaguewide standings. Until Thursday night, they had been winners of eight straight games.

You figure a winning streak can’t last forever, right? But when the Bruins fell in overtime to the Chicago Blackhawks, courtesy of Jonathan Toews’ overtime winner, the fans at TD Garden weren’t pleased one bit. Some fans were even throwing garbage on the ice.

The #Blackhawks pick up two points in Boston! #CHIvsBOS pic.twitter.com/urEFumcJkA

Garabage being thrown onto the ice.

There are times and situations where you can understand why fans would be angry, although that doesn’t mean throwing objects on the ice is ever really advisable. But especially in this situation! The Bruins had just won eight straight games, and even in the third period, they scored three goals just to force overtime in a commendable comeback effort.

Doesn’t seem like that bad of a loss to us. And, mind you, the Bruins still haven’t dropped a game at home in regulation. That’s a good team this year.