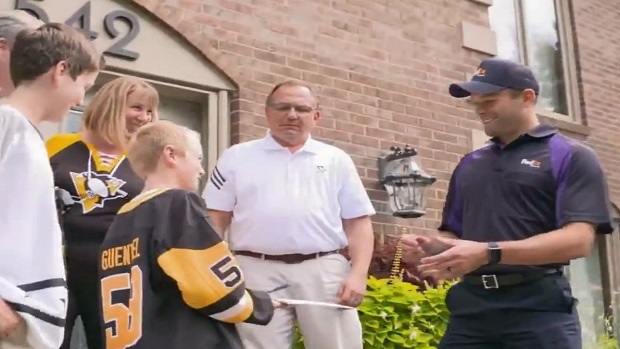 Each year, members of the Pittsburgh Penguins get together on a day before the preseason to personally deliver season ticket packages to the season ticket holders.

On Monday, the players were out and about in the Pittsburgh area surprising fans of all ages with their season ticket packages for the 2019-20 season and Bryan Rust went all in by dressing up as a FedEx delivery person with the truck and all.

When your parents say you're being taken out of school to go to the orthodontist, but Bryan Rust shows up with a special package dressed as a FedEx delivery man. BEST. DAY. EVER. pic.twitter.com/Mr3it9XfQM

We’re not sure what’s better, the fact that Rust went all in and dressed the part, or the fact that he wrote and signed a letter to excuse the children from class.

Looks legit to us. pic.twitter.com/X77Hbqbdhu

Jared McCann also came through with a pretty awesome, and hilarious, delivery as the Penguins forward greeted a lucky fan at the bus stop as he was dropped off from his day at school.

Um, can @jaredmccann19 pick us up at the bus? pic.twitter.com/re0GfLpn5B

It’s pretty awesome when a team shows you how much they appreciate your support by sending some of their players to your house to personally deliver your season tickets.