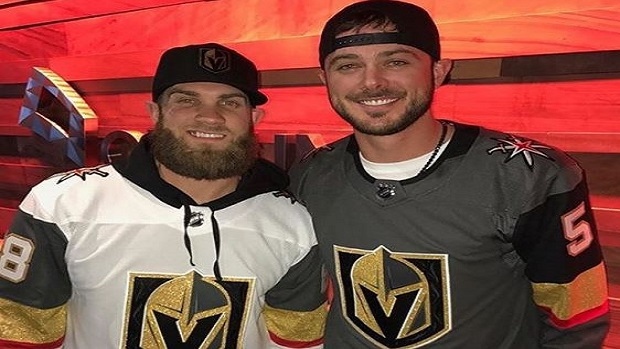 Bryce Harper and Kris Bryant have quite a few things in common.

They were both born in 1992 in Las Vegas, Nevada, they’ve both won an NL MVP award, both were named NL Rookie of the Year during their rookie season, and now you can add Vegas Golden Knights fans to the list.

On Tuesday night, the two young MLB stars took in the Dallas Stars and Vegas Golden Knights game at T-Mobile Arena and they were rocking their own Golden Knights jerseys.

Just a couple of former NL MVPs hanging out at the Vegas #GoldenKnights game on Tuesday night. . . (📷: @vegasgoldenknights)

It looks like Bryant is rocking a No. 5 Deryk Engelland jersey, while Harper showed up in a No. 88 Nate Schmidt jersey.

The Golden Knights have given their supporters a lot to cheer about so far this season, but Harper was on board with the organization long before the season started.

No more hints. We're glad to be spending our afternoon with Vegas local and Golden Knights fan @Bharper3407! #BoldInGold pic.twitter.com/9axzzIggsO

Things to know about @Bharper3407.

Harper has been spotted as other Golden Knights games in the past, so this is nothing new.

It’s very nice to see the hometown athletes show up to support the team, though.