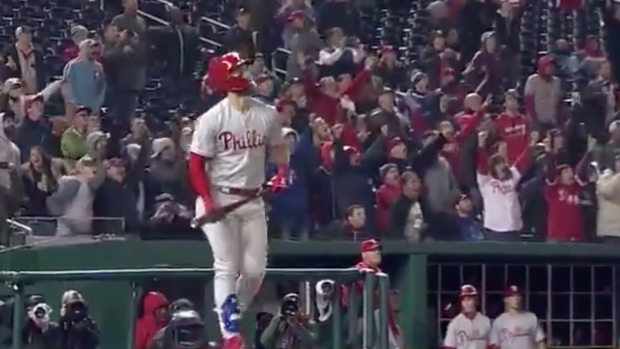 The most anticipated return from a former player with a new team in MLB happened Tuesday night as Bryce Harper returned to Washington to face the Nationals for the first time as a member of the Phillies.

Harper heard more boos than cheers, but he was more than prepared for it and didn't let the crowd reaction impact how he played.  The former MVP went 3-for-5 and hit a huge home run with a monster bat flip as the exclamation point.

I LOVE this. The MLB needs more passion. It needs villains. I'm all for Bryce Harper pic.twitter.com/qSj0gz4N2q

That was one heck of a bat flip and one that Nationals fans didn't really appreciate, but the rest of the baseball world sure did.

Blocking out the haters. pic.twitter.com/h2TOhqOuKa

That Harper bat flip was the equivalent of refusing to take your shoes off in someone’s house. Just so ruthless and rude. And I love it.

Bryce Harper had an EPIC bat flip after homering vs. his former team.@DTrainMLB loved every second of it (SOUND UP!) pic.twitter.com/VCJJwxaW0k

Why is Bryce Harpers bat flip such a big deal, is there an unwritten rule where you must release the bat a certain way❓

Harper and the Phillies are 4-0 on the young season and wrap up their series against the Nationals on Wednesday.