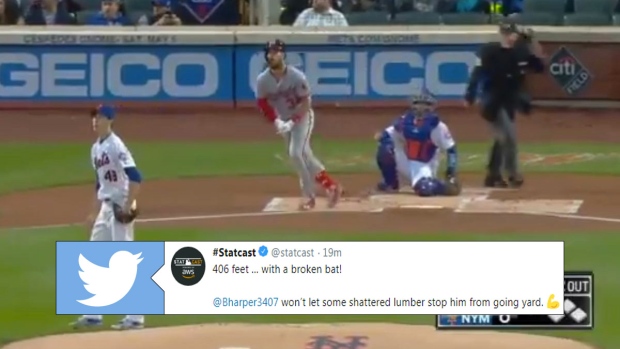 Bryce Harper is playing out of his mind throughout the first two weeks of the 2018 MLB season.

Heading into his 17th game of the season on Monday evening, the 25-year-old led the league with seven home runs and sat second in RBI with 14. In his very first at-bat of the game he added to his season totals in a very impressive way.

Harper opened up the game by smoking his eighth home run of the season, but it’s the fact that he managed to smash the ball 406 feet out to right-centre field with a broken bat.

This was a home run.

This bat BREAKS IN HALF. pic.twitter.com/1cUQZrwZJB

406 feet … with a broken bat!@Bharper3407 won’t let some shattered lumber stop him from going yard. 💪 pic.twitter.com/GVmVPhNdaw