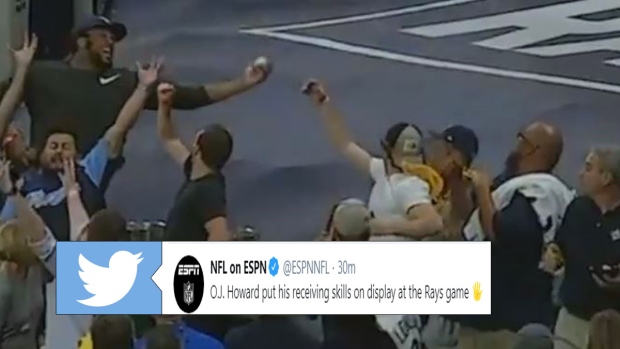 Tampa Bay Buccaneers tight end O.J. Howard was expected to get an increase in targets this year with DeSean Jackson out of the picture, but that hasn’t been the case for the 24-year-old through the team’s first five games of the season.

On Tuesday night, Howard was in attendance for Game 4 of the ALDS between the Houston Astros and the Tampa Bay Rays and he showed that he’s still capable of hauling in targets as he came up with a nice one-handed grab late in the game.

O.J. Howard put his receiving skills on display at the Rays game 🖐 pic.twitter.com/IZHLptyD5H

In the bottom of the 8th inning Austin Meadows hit a Will Harris pitch into foul territory and Howard happened to be right there to make the impressive catch. Of course, with it being a down year so far for Howard, the Twitter comedians were ready to go.

He should put them on display during his nfl games

Better than anything he’s done on Sunday this year 🤷🏼‍♂️

Only time he gets targets