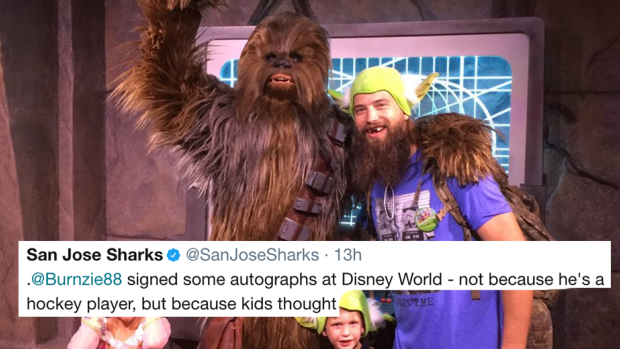 In terms of the most recognizable hockey players in the NHL, Brent Burns may be at the top of that list because of his incredible facial hair and unique look.

The obvious comparable for Burns is Chewbacca, so fans of Star Wars and hockey fans likely would recognize Brent if they saw him walking on the street out and about.

In fact, when Burns went to Disney World with his family, some little kids asked him for his autograph, but not because they thought he was a hockey player.

Instead, they asked him for his autograph because they thought he was a pirate.

.@Burnzie88 signed some autographs at Disney World - not because he's a hockey player, but because kids thought he was a pirate. [😂] pic.twitter.com/eNp30Xi82t

Listening to Burns tell the story is incredible and like he said, you can't blame the kids for thinking he was a pirate.

Tuesday in Vegas, Burns was the one asking for an autograph as he and fellow Ted Lindsay finalist Connor McDavid asked the NHL legend for his signature.

And as always, Burns was very fashionable for the event.