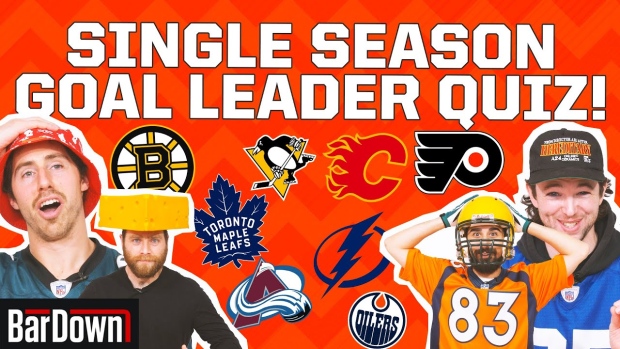 CAN YOU NAME EVERY TEAM'S ALL TIME SINGLE SEASON GOAL LEADER?

Guys, it’s been a hot minute, but the BarDown crew is back with a quiz and let us just say…

It’s definitely one of the toughest quizzes yet.

In this edition of the BarDown Quiz, Corwin, Luca, Sam and Jesse will attempt to name every franchise's all-time single-season goal record holder.

DZ is seriously making these quizzes harder each time! Oh and there’s a new twist…

Allow us to introduce to you the five-strike system with a bonus round at the halfway mark! Call it the Sam Glisserman rule, if you will. Or 1.5 batters if you’re using Jesse’s logic.

Kicking off at the top, the crew took a stab at the Anaheim Ducks and already we were met with chaos as Sam took the speed run approach and put it into overdrive.

So buckle up, put your football helmets on, and lets watch one of the hardest BarDown quizzes in history unfold!