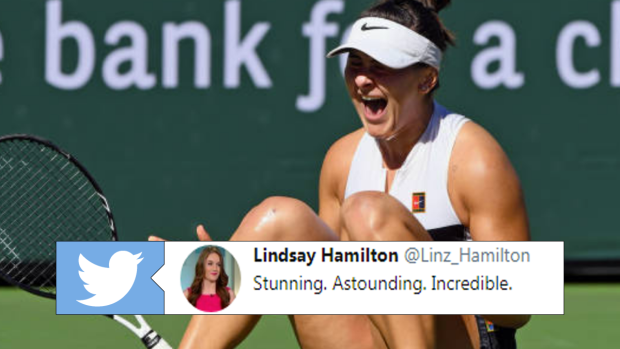 Canadian tennis is certainly on the rise. With Milos Raonic and Denis Shapovalov continuing to be a force on the men’s side of the tennis world, a new face has emerged as potentially Canada’s next top tennis player on the women’s side. Her name is Bianca Andreescu.

The 18-year-old has shown well at multiple tournaments recently, but Andreescu likely marked her biggest career highlight to this point by winning the BNP Paribas Open at Indian Wells on Sunday.

Andreescu defeated the #8 seed Angelique Kerber from Germany, surprising many and continuing to establish herself on the courts. With Eugenie Bouchard not enjoying the same success she was a few years ago, Canadians were very happy to see another Canadian start to make some major waves on the Women’s side.

18yo Bianca Andreescu is the youngest champion of a Premier Mandatory tournament and the youngest @BNPPARIBASOPEN champion since Serena Williams in 1999.

Bianca Andreescu, an unseeded 18-year-old wildcard from Canada, has just become the youngest woman to win the indian Wells title since 17-year-old Serena Williams in 1999. Defeats three-time major champ Angie Kerber 6-4, 3-6, 6-4. What a run. What a talent.

That was one of the best finals I've seen in a long time.

@Bandreescu_ Wow, what a match, showed a lot grit with the cramps and the 34 forehand winners...bam!!! CANADA IS PROUD OF YOU!

Congratulations to Bianca, very strong mentally to win this match 🎾

What a meteoric rise! Congratulations Bianca. The future is bright for Canadian tennis.

Yea Bianca, you made history today! Canada congratulates you!!!!

Wow Bianca is amazing so mentally tough! This is the biggest singles title EVER won by a Canadian in singles! Congratulations Bianca!!!

So incredible! What a match. A star is born. All of Canada is so Proud ❤️🇨🇦🏆🎾

Congratulations Bianca! Were do proud of you in Mississauga! 🇨🇦🇨🇦

This kid is seriously special. #Andreescu

Incredible hitting from Bianca Andreescu - what a future she has. Such a sound technique, real weapons and never afraid to go for it. Wow, what a you performance

That was one of the most phenomenal tennis matches I have ever seen 😊 These were your dreams, @Bandreescu_ you made then come true 🏆 #BNPPO19 #BiancaRising 🇨🇦

@Bandreescu_ what a match! Loved when you told your coach “I want this so bad!” You got it! So unbelievably proud!

Unbelievable. I've been watching tennis for years and have been waiting for a young female tennis player like her to rise in Canada. Go Bianca! A star on the rise.

Will be No. 24 in tomorrow’s rankings https://t.co/QQdxxemc93

None seem to properly describe the meteoric rise Bianca Andreescu has been on this year. #BNPPO19 champion. The biggest singles title ever won by a Canadian.
Oh, and she’s 18. 👏🏻 🇨🇦 🏆

The future is bright in Canadian tennis!