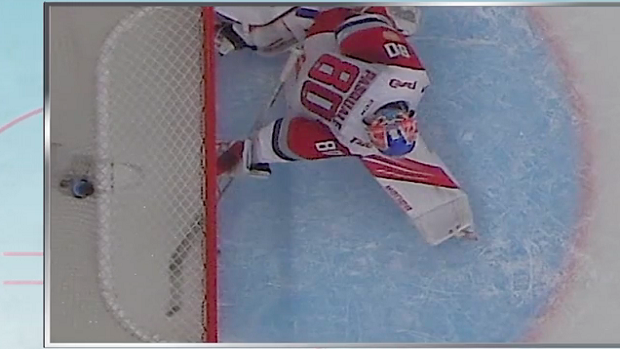 Eddie Pasquale is in his third KHL season and second with Lokomotiv Yaroslavl and he’s been pretty spectacular since he’s made the move overseas.

Coming off a season where he captured the Goaltender of the Year Award for going 25-11-3 with a .925 save percentage and a 1.91 goals against average, the Toronto native is looking to have a repeat of last year’s performance and he might have already made the save of the year just a handful of games into the season.

We honestly have no idea how Pasquale managed to keep that puck from crossing the goal line, but after reviewing it from multiple angles the officials confirmed that the puck never crossed the line and it was a good save from the Canadian goalie.

We have a 'Save of the Year' nominee – Eddie Pasquale 🇨🇦! pic.twitter.com/VDXLFZswpK

Yaroslavl Lokomotiv fell short last year in the playoffs, but Pasquale put up some pretty ridiculous stats in his 11 playoff starts as he went 7-4 with four shutouts, a 1.24 goals against average and a .951 save percentage.