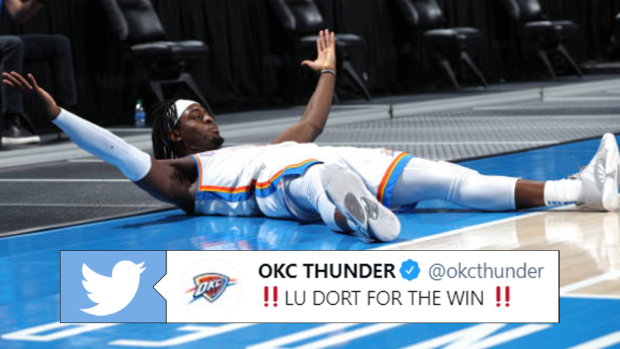 It’s an exciting time for Canadian basketball as young players continue to make themselves known around the basketball world. While Steve Nash stands out as the first major Canadian star in the league, players like Jamal Murray, Shai Gilgeous-Alexander, and Andrew Wiggins are leaving their mark on the NBA.

Canada is also producing a host of even younger talent, like Brandon Clarke and RJ Barrett. You could put Oklahoma City Thunder’s Luguentz Dort in that category as well, and he knocked down one of his best career highlights so far on Wednesday.

Facing the San Antonio Spurs, Lu Dort and the Thunder found themselves tied 99-99 with seconds remaining on the clock. The ball ended up in the hands of Dort, who put up the buzzer-beater and dramatically tumbled backwards as it swished through the rim.

Love to see it from the Canadian sophomore! Meanwhile, fellow Canadian Shai Gilgeous-Alexander knocked down a career-high 42 points.

Following the game, Dort reflected on the play, and you could see how noticeably happy he was with himself.

"I kind of knew they were going to over help on Al and I had to be ready to knock it down, so I was ready."