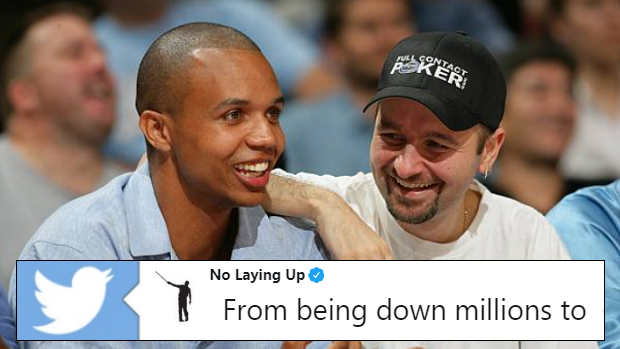 We’ve all seen Canadian poker legend Daniel Negreanu win some cash at the tables, but apparently he can hold his own on the links, too.

The Toronto native recently joined the No Laying Up podcast and shared a few wild stories about some of the bets he’s made over golf. We’re not talking about betting on athletes here either… we’re talking about Negreanu actually hitting the course for massive sums of money. The 45-year-old explained how he bet fellow poker legend Phil Ivey that he could shoot a score of 80 from the back tees at TPC Summerlin in Las Vegas, a PGA Tour-level course that hosts the Shriners Hospitals for Children Open. Negreanu was given just a year to complete the bet and narrowly pulled through with just a few days to spare.

Here’s what he had to say on the podcast:

You asked for golf gambling stories. @RealKidPoker’s got em. From being down millions to Phil Ivey, clawing his way back, playing $20,000 a hole, and a ton more.

The following is a transcription from For The Win.

“My golf game was not very good. The back tees at TPC Summerlin is about 7,000 yards. I can’t hit a driver more than 230, so I don’t hit any of the greens from back there. I bet them that if they gave me a year, I could shoot 80 from the back tees there.

So I’m drunk and we’re all drinking and I bet 550 thousand dollars on this. But I get as many rounds as I need.

Within about a week, I was shooting low 90s. Maybe a week later, mid to high 80s. And with about a week and a half to spare, actually, I was 2-under after nine. So then all the carts started coming out, because they were like ‘oh boy, here he comes.’ There was probably 60 golf carts on the last three holes, sweating me. And so, in the last three holes, I needed to go bogey-bogey-bogey to win the bet. They were the three toughest holes, also. The first one is the easiest of the three, so I of course double-bogey that.

Now I need to par one of the last two, and I make par on [17]. And then I have a six-footer for all of the money to win. I’m actually a good putter, but this putt – I hit the putt, and as I hit the putt, my knees sort of fell to the ground, in a way, but somehow the ball went in and I made it.”

Very, very cool story and all, but golf-related bets haven’t always turned out so swimmingly for the Poker star. He also explained how him and Ivey would golf together regularly and that he once lost $1.2 million to his counterpart on a single day at the course.

The following is a transcription from For The Win.

“We used to golf a lot back in those days, and I remember one time at Shadow Creek, I guess my grip was a mess. And I didn’t have anyone who was there to help me at the time, and he did and everyone else did. I just didn’t have a chance. Like, I couldn’t get the ball in the air. I lost like $1.2 million to him in one round.”

According to CasinoChecking.com, Negreanu has a net worth of $50 million, so losing $550,000 isn’t exactly the end of the world. Still, that’s a lot of dough!