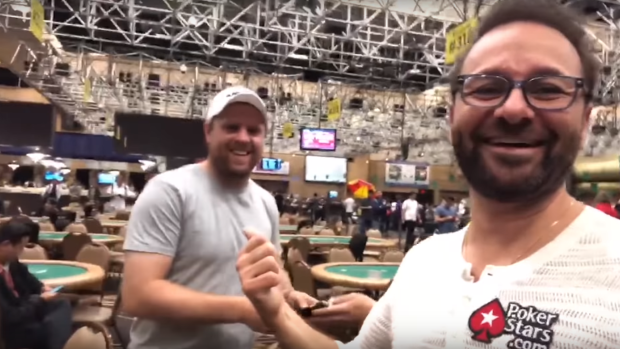 Daniel Negreanu saw an early exit in the 2018 World Series of Poker Main Event, although he seems to have taken it in good stride. So, moving on to the $1500 PLO Bounty Tournament in Las Vegas, Negreanu ran into none other than Phil Kessel.

Where can’t you run into Phil Kessel?

The two ended up playing a few rounds together, and thanks to Negreanu’s tableside humour, it resulted in some funny moments for his vlog. (Kessel appears at the 6:00 minute mark.)

Some poor guy gets fooled into believing that Kessel is Sidney Crosby, and it’s a bit wild. There isn’t a self-respecting fan of hockey who could think of making that mistake, but, hey, the folks in Vegas only just got their team a year ago, so we’ll give them some time to catch up to the curve. With how good the Golden Knights have been, though, we think the sport will catch on quickly.

It doesn’t seem like Kessel has found much success at the WSOP, though. He jokes around with Negreanu a bit at the table, bluffing him into some raises even with a poor hand, but the results haven’t been so favourable for him, either.

Don’t sleep on Phil . Kessel played in an event at the 2018 World Series of Poker this week and he finished in 118th place. . (📷: World Series Of Poker)