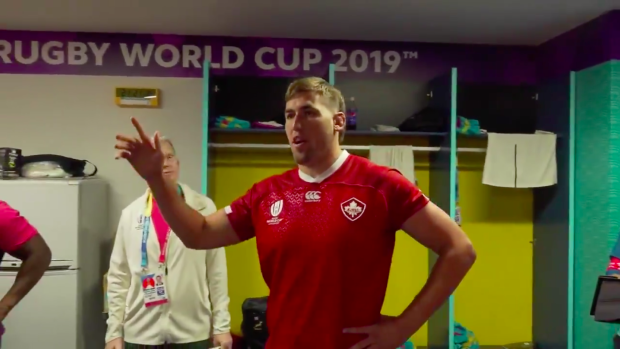 During Canada’s game against South Africa at the Rugby World Cup, lock Josh Larsen was ejected after being given a red card for an illegal tackle to Thomas De Toit.

Sure! Red cards and even illegal tackles aren’t necessarily all that uncommon in sports, but Larsen went out of his way to visit the South Africa changing room after the game to apologize for his hit. It’s a classy gesture on his part, and it was received as such by the team.

“I'm pretty gutted about it, I just wanted to come and apologize face-to-face and wish you guys all the best for the rest of the tournament,” said Larsen.

As the clip picked up steam around the internet, Larsen was praised widely for the gesture. This is definitely one of those things that make you feel a sense of pride to be Canadian.

From the neighborhood pitch to the world’s biggest stage, this is what makes rugby great 🏉🍁 #RugbyCA #RWC2019 https://t.co/Ac7u4eNP78

A Canadian apologises. A South African offers a beer in response. So many stereotypes here 😂😂

Well done Josh Larsen. Respect in rugby is something else. https://t.co/7Xu9IlHzpO

It's gestures like this that keep our sport truly exceptional

We all make mistakes. Sometimes they feel so monumental they're completely overwhelming. How you deal with those mistakes is what sets you apart@RugbyCanada and Josh Larsen take a bow https://t.co/LQJkPj5vc6

This is why I love sport and rugby in particular. Top man, @joshlarsen_4 ... you're a credit to your nation. #RWC2019 #RSAvCAN https://t.co/NcDRJmAgvW

Unfortunately, Canada fell to 0-3 at the Rugby World Cup with their loss to South Africa. They’ll get one more chance to go home with a win against Namibia on Sunday