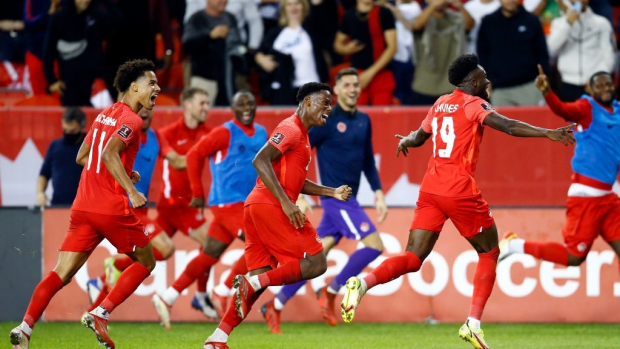 Canadian soccer fans, how hyped are you!? We can confirm that we were sitting on the edge of our seats all night Wednesday as Canada took on Panama for the World Cup Qualifiers.

Honestly, it might be an understatement to say we are witnessing greatness with Alphonso Davies and the rest of this talented squad.

Out of the gate, Panama put themselves on the board first but that wasn’t enough to keep Canada off their trail as Canada tied things up in the 27th minute.

Canada get the equalizer... what say you #CanadaRED? Tajon goal or own goal? #CANMNT #ForCanada pic.twitter.com/NChNihsQrS

The equalizing goal was just the start of Canada’s incredible night as the Bayern Munich star left us absolutely jaw dropped as he came up behind defender Harold Cummings to pick up the loose ball and put Canada ahead 2-1!

Alphonso Davies makes it look so easy!!! What a goal!! 🇨🇦

Tajon Buchanan and Jonathan David were able to continue helping Canada’s cause as they put up goals to allow Canada to capture the win over Panama, 4-1.

And fans were absolutely LOVING this win.

OMG could it actually happen!? Can we actually make the world cup for the first time since 1986? https://t.co/gxcsHNYGwX

If you don’t think Alphonso Davies is the best player in Concacaf, you have no idea what you’re talking about. END OF STORY.