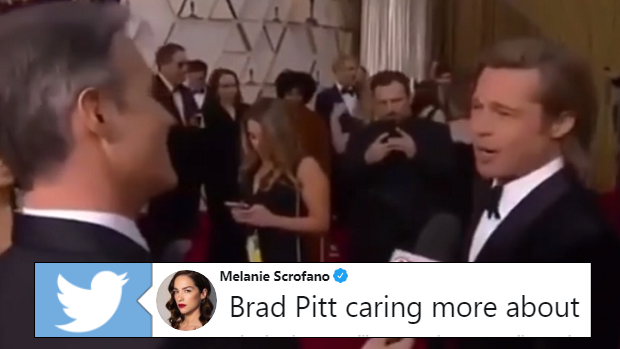 So… Apparently Brad Pitt is a hockey fan? Well, we’re not 100% sure but he seems to enjoy hockey culture. At least that’s what we’re gathering from his comment about a certain Canadian show at the Oscars.

eTalk’s very Ben Mulroney caught up with the Hollywood star on red carpet last night and out of nowhere confessed his love for Letterkenny. This was pretty unprompted as well, so clearly Brad has a soft spot for Wayne, Reilly, Jonesy and the crew.

It turned out to be a pretty, pretty, pretty solid night for Mr. Pitt. The 56-year-old took home his second Oscar for best actor in a supporting role as Cliff Booth in Once Upon a Time in Hollywood. But will he star in Letterkenny is the real question?

Okay Brad, if you feel like sticking in the States we understand. Can you at least audition for a role in the new Mighty Ducks series? Emilio could use a little competition on an opposing bench.