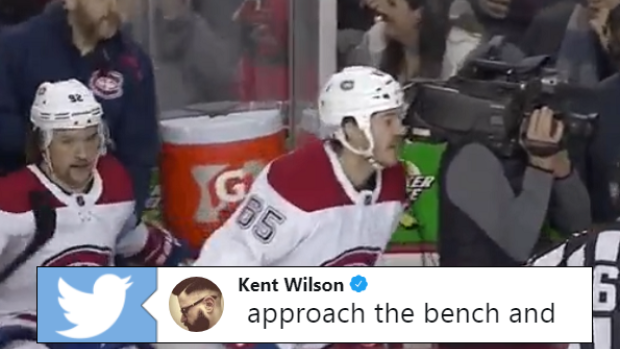 Andrew Shaw reacts to Jonathan Drouin getting cross-checked in the face by Mikael Backlund.

There are some things you just can’t do in hockey, and cross-checking an opposing player on their bench is definitely high on the list.

The Montreal Canadiens visited the Calgary Flames at the Saddledome last night where things got seriously ugly after Arturri Lehkonen put home the game-winning goal with just over seven minutes left. The two sides exchanged such harsh words that Flames forward Mikael Backlund felt the need to cross-check Jonathan Drouin while he was off the ice. It was no surprise to see Andrew Shaw lose it afterward as he had to be contained by his teammates.

That looked bad… hockey fans weren’t impressed either, though some understood Backlund’s frustration.

Upon seeing the replay, Backlund did approach the bench and deserved the penalty. That said, call the obvious fowls during the play as well please.

I love that immediately after the refs missed two obvious calls on the Habs the Habs scored and the refs called a penalty on the Flames and only the Flames when both Domi and Backlund were being shitheads.

Clearly you didn't see the play, Backlund is lucky all he got was a 2 min penalty. Cross check to the face of a guy sitting on the bench is pretty bottom barrel gutless.

Glad @jodrouin27 is okay after that coward Backlund did that. Backlund is such a sissy , he doesn't even have a twitter page. @NHLFlames @CanadiensMTL #Habs

The Flames Backlund should be suspended for attacking the Canadiens bench. Can't allow that. @NHLPlayerSafety

Drouin was sitting on the bench.

As for Habs players? They appeared to be all smiles after their 3-2 victory.

Domi showing his teammates what he did to piss off Backlund and he’s absolutely loving it. pic.twitter.com/KC8ujCNOq4

Backlund ultimately received an unsportsmanlike conduct penalty on the play. Sure, the refs missed a couple of call but perhaps Backlund was just frustrated that his team wasn’t getting any of last night’s bounces. Calgary out-shot Montreal 45-22 but couldn’t find a way to get the best of Carey Price.

We’ll have to wait and see if the NHL hands Backlund any further discipline going forward.