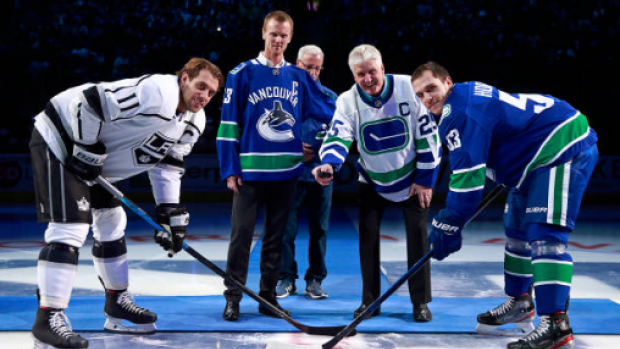 It might've been the worst-kept secret in hockey, but Bo Horvat was finally named captain of the Vancouer Canucks.

Both Sedin brothers were on hand for the ceremony, which doubled-down as the club's home-opener in their 50th season. Henrik, along with the team's first captain in club history, Orland Kurtenbach, presented Horvat with a fresh jersey with a stitched on "C."

To kick off their 50th season, the Canucks brought out goaltender Kirk McLean decked out in the retro skate jersey with his a retro version of his black pads from the 1994 Stanley Cup, along with former power Todd Bertuzzi wearing the orca jersey.

How cool was It seeing Kirk McLean all geared up, mask and all. #goosebumps #Canucks #Canucks50 pic.twitter.com/IqgCDKpSnm

The Canucks didn't name a captain after the Sedins retired at the duration of the 2017-18 season. Alex Edler, Chris Tanev, and Brandon Sutter were named assistant captains last week.

At 24, Horvat was the youngest captain to be named since Trevor Linden, who was not on hand for the ceremony, was named captain at age 20.

The Rodney, Ontario product is pointless so far in two games on the season.