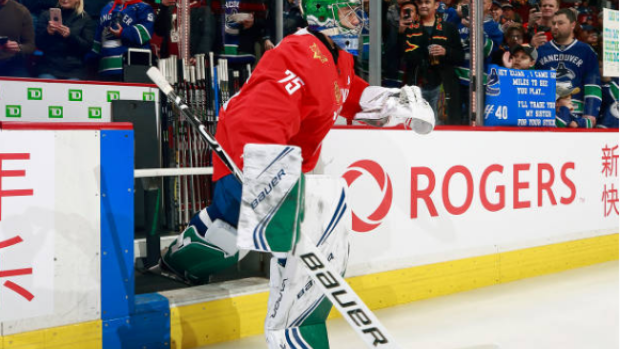 A pair of Vancouver Canucks will make their NHL debuts on Monday night when the team hosts the San Jose Sharks.

19-year-old Michael DiPietro, who started for Team Canada at the 2019 World Juniors in Vancouver just over a month ago, will step back into the crease at Rogers Arena and start in goal.

The 64th overall pick in the 2017 NHL Entry Draft is on an emergency recall with the Canucks and will be tasked in shutting down a Sharks team that is on a five-game winning streak where they've averaged 4.6 goals per game over that span. DiPietro is starting in place of Jacob Markstrom, who will sit out the game due to tightness in his lower body and will not be available. The Ottawa 67s starter owns an 18-10-1 record with a .913 save percentage after coming over from the Windsor Spitfires in a mid-season trade.

#Canucks confirm DiPietro to start in goal vs SJ. Originally a planned start for Markstrom, the change is a precaution due to tightness in his lower body and extends his maintenance and recovery period between starts. Markstrom will not be available to play tonight’s game. pic.twitter.com/4hGlLaMg8f

After a four-point performance over the weekend for the Utica Comets, 22-year-old Zack MacEwen earned a call-up to the big club. An undrafted free-agent signing, the 6-foot-4, 212-pound right winger will join Bo Horvat on the Canucks second line. He's notched 42 points (17 goals, 25 assists) in 49 games with the team's AHL affiliate. A power-forward, MacEwen is a bit of a throwback and has exceeded expectations after signing in March of 2017.

Wearing custom red jerseys to celebrate Chinese New Year, the two youngsters led the Canucks out onto the ice for warm-ups, with the team giving them the traditional treatment of letting them get a couple of warm-up laps in before the rest of the team joined them.

#MichaelDipietro and #ZackMacEwen will both make their NHL debuts for the @canucks against the @sanjosesharks!

The Canucks come into the game 16 points behind the Sharks in the Pacific and sit one point out of the final wild-card spot in the Western Conference.