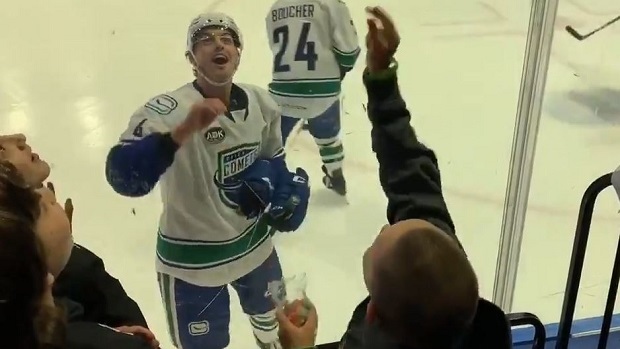 It’s the best time to be a young hockey fan because players today give away pucks and sticks during warm-ups at an extremely high rate.

A lot of the times the players just toss the pucks to the young kids pressed up against the glass or hand off a stick to the smallest set of hands reaching out over the tunnel, but sometimes they like to interact with young fans and give them a memory that usually lasts longer than the souvenir.

Earlier this week the Utica Comets hosted the Binghamton Devils and one young fan had the night of his life before the game even started.

.@Josh_Teves4 went to @Princeton so he knows a good deal when he sees one. One puck for one @SwedishFish pic.twitter.com/uAGUA5QtdP

This young fan wanted to get his hands on a puck but wasn’t expecting it for free. So, he put out the offer to Utica Comets defenceman Josh Teves the idea of trading his bag of candy for a game puck and the Vancouver Canucks prospect didn’t waste any time making the deal. In fact, he even sweetened the deal for the young fan and only took one piece of candy in return.

That’s my boy! We brought him a box of Sour Patch Kids but he only wanted one, not the whole box. This made our day!

It doesn’t get any sweeter than that.