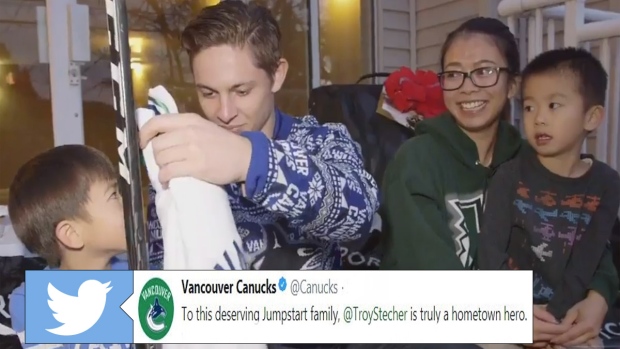 One of the best parts about the holiday season is watching the professional athletes spend some time in the community and give back to those who need it the most.

Earlier this month, Vancouver Canucks defenceman Troy Stecher teamed up with SportChek and surprised a family in his hometown of Richmond, BC, with some new sets of hockey equipment for the kids just in time for Christmas.

To this deserving Jumpstart family, @TroyStecher is truly a hometown hero. Watch as he and @SportChek help make their holiday wishes come true. pic.twitter.com/NC3rWTWSjj

The 23-year-old surprised the two kids with everything from new skates to a new helmet and even left them with their very own No. 51 Stecher Canucks jerseys.

#TBT to when we paired up with the @Canucks & @troystecher to surprise a lucky @CTJumpstart family with some gifts for the holidays! #MyBetter pic.twitter.com/xoNOLBRLeZ

The sophomore defenceman didn’t stop there, though. Earlier this week he teamed up with Brock Boeser and Canucks For Kids to surprise another family in the Vancouver area with some gifts ahead of the holidays.

Here is some cuteness for your Tuesday afternoon! The holiday giving continues as Holly Donaldson & @BoHorvat visit the Santana family and @BBoeser16 & @troystecher stop by to see the Rehman family. 💙💚 pic.twitter.com/XaIkkDuRDp

The Canucks will look to end a three-game losing skid before the Christmas break when they host the St. Louis Blues on Saturday night.