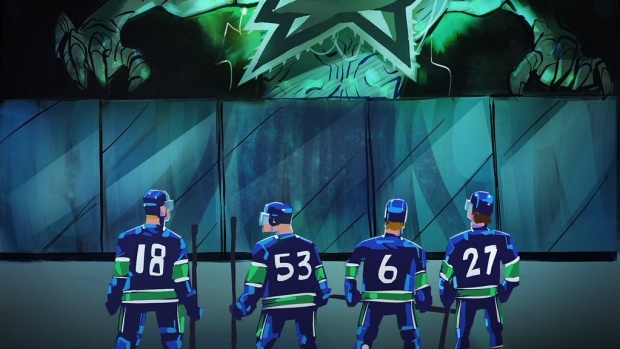 We here at BarDown are big fans of the television show Stranger Things.

The Leafs, Golden Knights, and Devils are some of the top teams in the league, Stamkos and the Lightning have taken charge, and the Oilers and Habs haven't been performing well. It has definitely been a Strange Season ...

Last week, we combined did an mashup using Mike Babcock’s demotion of Mitch Marner to the Maple Leafs fourth line, and some of the reactions from Mitch’s peers around the league.

There are some "Strange Things" going on in the NHL...😂 . #ThumbLeague

With Halloween now just hours away, the red hot Vancouver Canucks will host the Dallas Stars on Monday night. To get in the Halloween spirit, the team created a special Stranger Things pre-game graphic.

The Dallas Stars as a Demogorgon with youngsters Jake Virtanen, Bo Horvat, Brock Boeser, and Ben Hutton all starring at it perfectly encompasses the show.

Earlier today, we featured this pumpkin that had  Boeser's face and hair perfectly carved onto a pumpkin.

A @canucks fan carved a pumpkin of rookie Brock Boeser (@bboeser). The face and flow are terrifically on point. #Canucks #Halloween 🎃 . . Via Twitter/Bruce Ng

The second season of the show is now on Netflix.