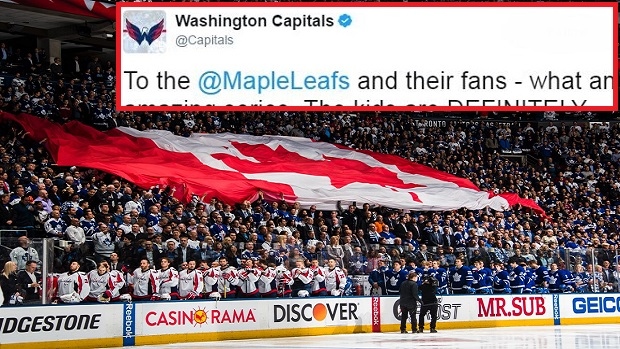 When the NHL playoff matchups were set, a lot of people were expecting the Toronto Maple Leafs to get steamrolled by the Washington Capitals in the opening round. Instead, it turned out to be the best series of the opening round.

The #Capitals are moving on after defeating the #MapleLeafs 2-1 in Game 6.

Despite falling short in the postseason, Maple Leaf fans from far and wide couldn’t be happier with their team’s performance in the six games against the Capitals, especially since they showed the entire NHL that they’re going to be a force in a few years.

The boys give one last salut to their amazing fans.

After seeing just how dangerous the Maple Leafs can and will be, the Capitals shared a heartfelt message with the Leafs and their fans following their first round series victory.

To the @MapleLeafs and their fans - what an amazing series. The kids are DEFINITELY alright. See you next season. Great series. #CapsLeafs pic.twitter.com/kC8l50wXTs

Very classy move by the Washington Capitals after their series-clinching victory.

As for the Capitals fans, especially those in Toronto, they're just excited to see their team move on to round two.