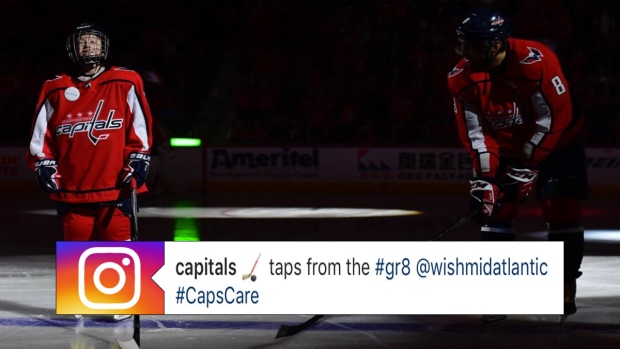 The Washington Capitals hosted the Philadelphia Flyers on Sunday afternoon and they had a new face on their roster when the starting lineups were announced before the game.

14-year-old Washington Capitals fan William Cody is currently battling leukemia and he got to return to the ice for the first time in two years thanks to the Washington Capitals and the Make-A-Wish Foundation. On Saturday, Cody joined the rest of his Capitals teammates at the routine morning practice and followed that up with everything else the professionals do.

Today, William Cody from @WishMidAtlantic will be on the bench for warmups and in our starting lineup. Here's how the last 48 hours have gone for the 14-year old battling leukemia. #CapsCare #ALLCAPS pic.twitter.com/j8ejh46LaP

William Cody’s wish to become a Capitals player and meet the team is coming true through Make-A-Wish ® Mid-Atlantic. On Friday he signed with Washington, on Saturday he practiced with the team and on Sunday he’ll be in the starting lineup. #CapsCare #ALLCAPS

Cody also received his very own No. 37 jersey and his own stall in the team’s locker room, where he was seated in between Braden Holtby and Brett Connolly.

Although Cody didn’t actually take part in the pre-game skate with the rest of his teammates, you can bet he was on the bench taking it all in from the best seat in the house.

We can’t wait to see #wishkid William in the starting lineup for the @Capitals game today! Good luck, William! You’re already the #MVP to us! @CapitalsPR #ALLCAPS https://t.co/hCxvBqAnYQ

The young Capitals fan may not have joined in on the pre-game warm-ups, but he was out there on the ice for the national anthem and the announcement of the starting lineup, and he shared a moment with Alex Ovechkin the two will never forget.

It's always great to see players and teams come through for young fans like this and it will never get old.