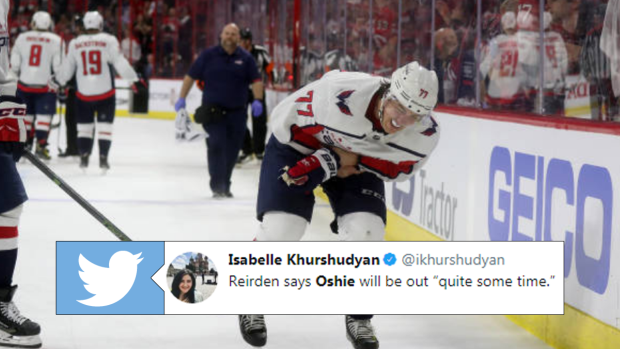 Carolina Hurricanes coach Rod Brind’Amour has been in the headlines quite a bit recently. His take on the Alex Ovechkin vs. Andrei Svechnikov fight was one of those hot takes, with him even saying that he’s not sure fighting is needed in the game at all.

Not a fan of the rough stuff? Well, maybe not exactly.

The coin has flipped to the other side, with Warren Foegele pushing Caps forward T.J. Oshie into the boards. Oshie awkwardly crumples on impact, and since he left the game with no return. Following the game, Caps’ coach Todd Reirden confirmed that Oshie would miss “quite some time”, a crushing blow for the defending Stanley Cup Champs.

Reirden says Oshie will be out “quite some time.”

With suspensions becoming more and more of a sensitive issue these days, you can bet that an injury like this is going to stir up a conversation. According to Brind’Amour, there’s nothing to talk about.

"He barely hit him." Rod Brind'Amour gave his take on the Oshie injury. pic.twitter.com/d7jMv1d907

That kind of take is certainly going to ruffle some feathers in D.C. , especially because it was at the expense of one of their key players.

That’s locker room material right there. If the Caps don’t respond to that BS, the season is over.

I'm sure he barely hit him, just like ovi looked up how many games svech had fought in

Of course he said that. With clear elbow to the head and targeting the head in a hit, BrindAmour is coaching dirty hockey

That should have been a 5 MINUTE MAJOR!

We’ll see if anything comes from this in the coming days, but one thing is for sure. The next two to three games between these two are going to be intense.