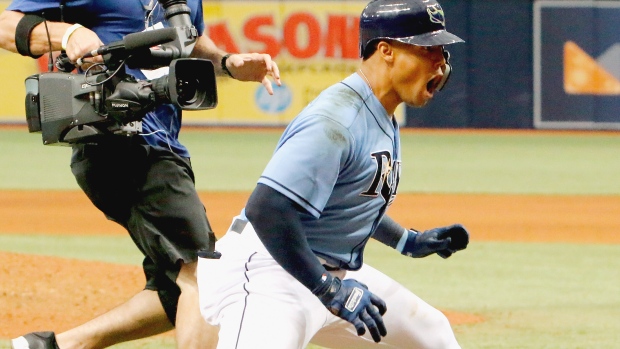 If baseball’s unwritten rules had their way, then the sport would be an emotionless affair punctuated by exhilarating sporting moments, but never any celebrations to match. Thankfully, Carlos Gomez of the Tampa Bay Rays is a 32 year old adult man who spends his time on the field with the glee of a child, and he will never not have his fun.

Case in point: After smacking a walk-off dinger to beat the Minnesota Twins on Sunday, Gomez celebrated with a sweet, sweet bat-flip (tongue out and all!). After rounding the bases, he busted out Ray Lewis’ signature pregame dance for good measure:

RT to make someone who hates bat flips angry. pic.twitter.com/hYDOw8PFqC

There’s a man with no regard for hokey notions of professionalism in baseball. Look at how much fun he’s having!

Here’s another angle -- you can see the swagger dripping as Gomez lets the bat tumble out of his hands.

Oh yeah, Carlos Gomez knew it was a WALKOFF.

Always known for wearing his emotions on his vest, Gomez also snapped a bat on his knee earlier in the game, when things hadn’t been going quite as well for him. It’s... also pretty impressive, honestly.

Keep doing you, Carlos Gomez. Never let the haters win. If baseball’s unwritten rules were always followed to the letter, we would never have been graced by Jose Bautista’s bat flip for the ages: