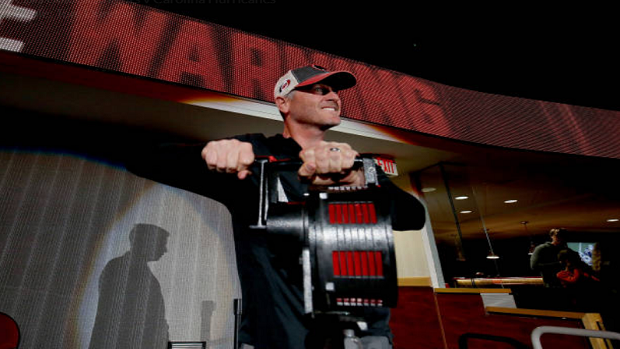 There’s no denying it; hockey is evolving at a rapid pace.

The game has sped up exponentially, and has a heavy emphasis on offense, which has become increasingly obvious with the high-scoring affairs that the 2018-2019 season has graced us with thus far.

Despite the fact that a defensemen went first overall in last year’s rookie draft, the NHL is definitely becoming an environment that favours wicked offense.

This was confirmed yesterday, when Carolina Hurricanes owner, Tom Dundon, sat down with sat down with the Triangle Business Journal to discuss both business and sports tactics, and dropped some pretty interesting insight as to his future drafting tactics.

Hot take, or what?

In addition to the comments about Dondon’s determination to only draft forwards high, he revealed that the Hurricanes are in the market for a ‘sniper’.

This isn’t the first way the Canes have been at the forefront of changing the game of hockey, and their free spirited post-win celebrations at home have attracted some serious attention from all over the hockey world.

Dondon has taken a few interesting and unique stances as team owner, and it’s rumoured that he is the reason behind the Cane’s avoidance of wearing their white away jerseys.

Word is the Habs are wearing their white sweaters at home tonight at the request of visiting Carolina. The Hurricanes try to wear their reds whenever possible. Word is Carolina owner Tom Dundon not a big fan of their whites

While the Canes may not be leading the league in the standings right now, we’d argue that they’re leading in innovative ideas.