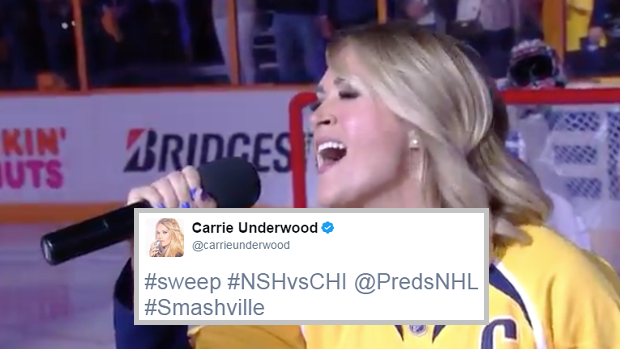 Carrie Underwood might be the most well-known Nashville Predators fan in the world, and she has been repping her squad all series long.

Underwood wasn’t singing last night, but she was definitely celebrating. She posted this GIF to Twitter after the Preds won.

She wasn’t the only one posting adorable videos in regards to Nashville’s win either. PK Subban posted this clip of his nephews celebrating after the game.

We’re sure the Predators have more plans to bring out the star power of the country world in the second round and beyond, but we’re not sure anybody is going to top Underwood’s performance in Game 3.

Surprise! @carrieunderwood came out and rocked the anthem in Nashville. #StanleyCup pic.twitter.com/HQJ8Z9TJC2

Fisher has yet to record a point in the playoffs yet, but we’re sure he’s still feeling pretty good.