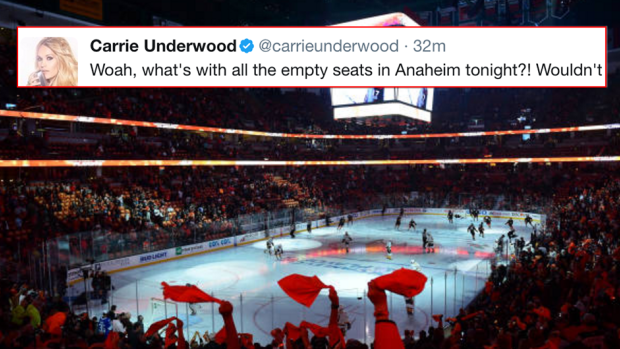 Wednesday, the Ducks beat the Oilers to advance to the Western Conference final and Friday night they opened their series against Nashville at home.

Ladies and gentlemen,Here we go again...🏒showtime💪 NHL conference finals ,Ducks vs.Predators, it will be a great series , so excited 😆 go 🦆

Although the game started at 9:00pm on the east coast, which isn't very late, for anyone in Anaheim, Game 1 started at 6:00pm, which is obviously earlier than normal.

As a result, there were a lot of empty seats at the Honda Center for the start of the game, and fans were quick to point out that fact.

Wow has anyone else seen how many empty seats there are at the ducks predators game!? #nhlplayoffs

All those empty seats are really excited the Ducks scored

Not only did fans notice the numerous empty seats, but Carrie Underwood did as well, and she fired a shot at Ducks fans.

Woah, what's with all the empty seats in Anaheim tonight?! Wouldn't happen in #Smashville that's for sure!! #NSHvsANA #GoPreds

As many hockey fans know, Underwood is married to Predators captain Mike Fisher and she's as big a Predators fan as anyone.

The shot fired is a ruthless one, but there is an explanation as to why there are so many empty seats.

People, enough with the empty seats in Anaheim tweets. It's 6 pm in SoCal and in case you didn't know, traffic brutal there. Calm down.

Yes, I'm defensive of the three California markets. Three solid organizations and one of them has been in the WCF eight straight years.

As per Pierre LeBrun, the Ducks confirmed to him that Game 1 is indeed sold out, so timing and the fact that there is also an Angels game happening explain why there were so many empty seats.There really isn't any down time for the remaining teams in the NHL playoffs.

Give it some time, hockey fans, the building will be full, but Ducks fans, Underwood's tweet is also a challenge for next game, don't forget that.