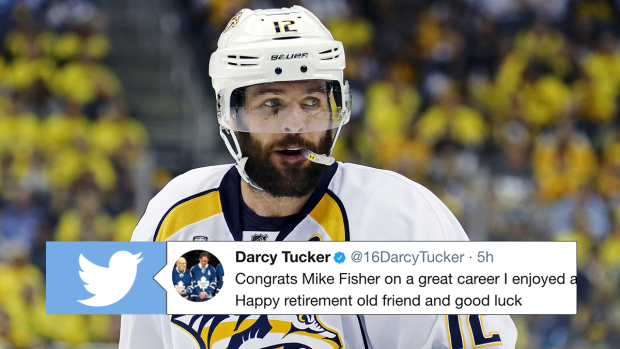 Mike Fisher player 17 seasons in the NHL totaling over 1000 games between his time with the Ottawa Senators and Nashville Predators.

Of course, in that time, he made an impact on a lot of people and players – and not just the ones on his team. He was always considered a strong leader in the game and for people who like old time hockey, he was definitely considered someone who “played the game the right way”. Most recently, he led the Nashville Predators to the Stanley Cup Final as their captain, but now he has called it quits.

Today in a Players’ Tribune-style article with the Tennessean, he wrote his goodbye to the NHL, stating that this was the “Hardest decision [he’s] ever had to make, be [he] knows [he’s] made the right one.”

It may be the right decision for him, but by the reaction after his announcement, he will definitely be missed.

Congrats Mike Fisher on a great career I enjoyed all of our friendly interactions. Happy retirement old friend and good luck #catchindeers pic.twitter.com/7h2XO71Reh

Stick taps to @mikefisher1212 on a fantastic career. Always tried to model my game after him. He did everything the right way. #respect

One of the most honest, tough guys to play against. Always looked up to his work ethic and compete. Enjoy retirement @mikefisher1212

Mike you're one of the most positive influences I have in my life and I want to congratulate you on a legendary career. God bless. - Dicky

Captain @mfisher1212 I sure am going to miss watching you play and cheering you on with the rest of Smashville, but I so look forward to seeing what God has in store for you in this next chapter of your life. You've given your teammates and the game your all for so many years...you've worked so hard and made us all so proud! Isaiah and I love you so much and are so excited to be able to have you home a lot more...We can't wait to cheer on the @predsnhl WITH you in the stands! #ThankYouSmashville #PredsFansForLife

Congratulations on an incredible career Mike and we wish you the best in all of your future endeavors.