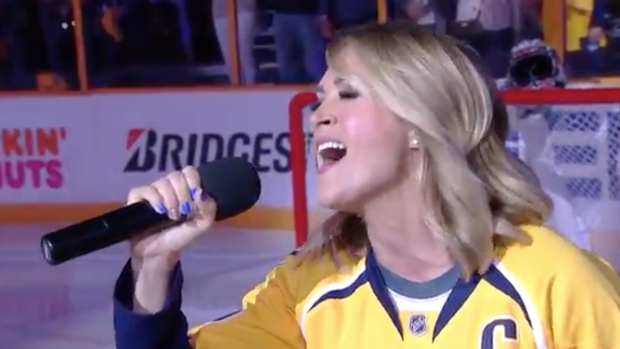 Chicago dominated the season series and failed to score a goal in the first two games of the playoff series on home ice, which is shocking to say the least.

Speaking of shocking and surprising, the Predators had a surprise of their own for fans before puck drop as Carrie Underwood came out to sing the national anthem, and she did an outstanding job.

Surprise! @carrieunderwood came out and rocked the anthem in Nashville. #StanleyCup pic.twitter.com/HQJ8Z9TJC2

There's no better way to kick off a playoff game in Nashville.  Underwood's performance somehow got the building even more fired up.

The Predators couldn't keep the Hawks off the scoreboard in Game 3, but they did erase a 2-0 deficit to win it in overtime and take a 3-0 series lead, which Underwood loved.

Aside from being one game away from the second round, the win was also significant from a historical standpoint.

Nashville will try and end the series Thursday night at home.