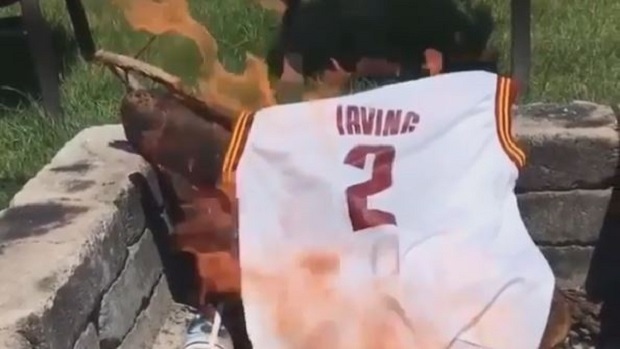 A jersey is often the most treasured item in a sports fan’s wardrobe. It’s important because it represents the years of fandom they’ve put behind a team or player, not to mention the half a paycheck that they likely spent on it. Buying a jersey with a player’s name on it is a commitment that can sometimes go sour.

For example, Oklahoma City Thunder fans spent thousands of dollars on Kevin Durant jerseys only to have him become the biggest villain in team history last year. Now there are hundreds of fans uncomfortably walking around in No. 35 Thunder jerseys wishing they’d gotten a Russell Westbrook tarp instead.

Some fans don’t bother to deal with the awkwardness and instead decide to symbolically and dramatically dispose of their vilified jerseys with the most aggressive element on earth – fire.

This act of closure is nothing new to basketball fans, who often get offended when superstars skip town for another franchise and proceed to burn their jersey.

How to properly burn a Kevin Durant jersey on the Fourth of July. 🔥🇺🇸 pic.twitter.com/sv46FT2Zpz

We did a crowd poll at the @EVSguyUT Backyard BBQ:To burn the Hayward jersey or not? It was unanimous. pic.twitter.com/VgjFYMaUGu

Still selling my LeBron jersey if anyone needs one to burn! 🔥🔥🔥🔥🔥🔥 #NeverForget pic.twitter.com/Kej2mLjn5e

You’ll notice a common theme between these players – they all left for another team. That is what makes the video of a Cleveland fan burning Kyrie Irving’s Cavaliers jersey all the more puzzling – he hasn’t actually left the team yet.

His request to be traded out of Cleveland is sure to leave a taste of bitterness in the mouths of Cavs fans, especially after feeling the pain of their since-returned superstar LeBron James leaving town seven years ago. But technically, he is still under contract with the Cavs and is not guaranteed to be playing elsewhere anytime soon. Whether or not he would be seen as a villain if he returned to Cleveland is not known, but the way he went about asking for a trade seemed to be a respectful as possible to the organization. There was no finger-pointing or dramatic TV specials involved, just a simple request to leave. On top of this, Irving played a crucial role in bringing the Cavalier’s their first and only NBA title, including hitting the game-winning dagger in Game 7.

Needless to say, some fans are baffled by the jersey burning.

If you're burning a Kyrie jersey you're an idiot.

Bruh the fact ppl are burning Kyrie jerseys makes me sick, that man did a lot of great things in that jersey

Kyrie gave us six good years and helped bring a championship to Cleveland yet y'all are burning his jersey now? 🤔

Burning a jersey of the man who hit THE SHOT that broke the curse??? Shame on you hammer for liking this tweet. Kyrie will always be a hero

Perhaps some basketball fans are becoming a little too trigger-happy with the barbeque torches and should instead remember the good times that player brought to the franchise.