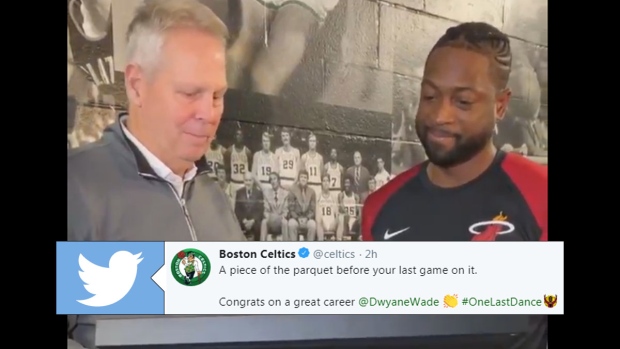 Dwyane Wade’s final NBA season is nearing the end as his Miami Heat are doing whatever they can to try to clinch a spot in the postseason to give him a few more playoff games under his belt.

On Monday night the Heat were in Boston for a date with the Celtics and since there’s a good chance it’ll be the last time D-Wade plays against them in Boston, they wanted to make sure to send him out with something special.

A piece of the parquet before your last game on it.

Before tip-off, Wade was approached by Celtics general manager and President of Basketball Operations Danny Ainge, who gifted Miami’s all-time leading scorer with a piece of the court from the 2008 TD Garden and also forgave him “for messing up Rondo’s elbow.”

One Last Visit to Boston pic.twitter.com/itFzk26ewZ