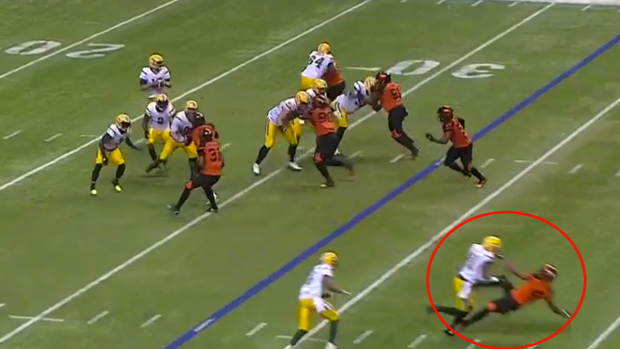 Ego is a huge part of the game of football. Of all the sports in the world, you’ll see football players trash talking more than almost anyone. Part of the reason is because it’s in the nature of the game, but it’s also because football is all about individual matchups.

Often times players will be matched up against each other for most of the game. This happens in the trenches as the offensive and defensive lines battle, but it also happens between receivers and defensive backs – positions that seem to be especially prone to trash talking.

For one B.C. Lions defensive back, who we believe is Garry Peters, definitely regrets challenging Edmonton Eskimos receiver Duke Williams. You can see Peters boasting near the bottom of the screen.

Yikes, not exactly what Peters wanted. Williams is 6’2, 216 lbs and not necessarily one of those lanky receivers that crumble when hit. He’s a load.