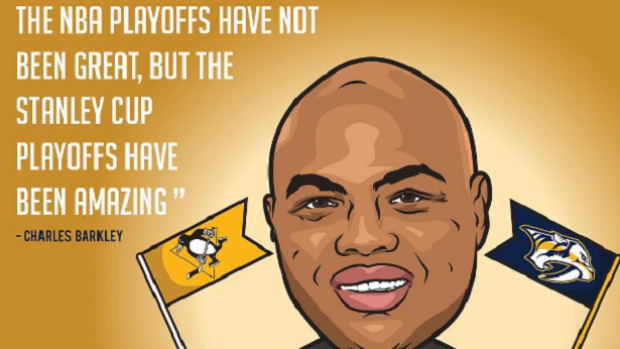 Charles Barkley had a 16-year career in the NBA and has since become a well-known basketball analyst for TNT. Despite a life shrouded in basketball, Barkley has always made time for hockey – even if it’s during his contractually-obligated basketball time.

Charles #Barkley has been a big fan of the #StanleyCup Playoffs for many years.

We’re not sure how his bosses feel about that, but Barkley’s brand has always been to say what he wants, unapologetically and with next to no filter, so it looks like they are letting it slide. Besides, his little hockey quips are entertaining for the audience even if it’s not directly promoting their show.

On Monday, Barkley was invited to Bridgestone Arena by NHL commissioner Gary Bettman to watch Game 4 of the Stanley Cup Finals. Despite the now famously excitable fan base, the most excited fan in the building appeared to be Barkley. He got to talk about his love for hockey on TV, he got to chum around with the players, and he even got to crash Wayne Gretzky’s press conference with a hilarious question.

Charles Barkley has his eye on a few big names for tonight's game.

Sometimes when people come to hockey from a different domain it can be seen as an imposition (*Cough* Bieber *Cough), but the hockey world seems to have embraced Barkley’s rogue NBA betrayal, if not only because Barkley’s honesty has brought light to something many have been thinking.

While Charles Barkley has always been full of surprises, it’s a pretty good bet that he’ll be paying close attention as the series shifts back to Pittsburgh for Game 5 (As long as he doesn’t have an NBA game to watch).