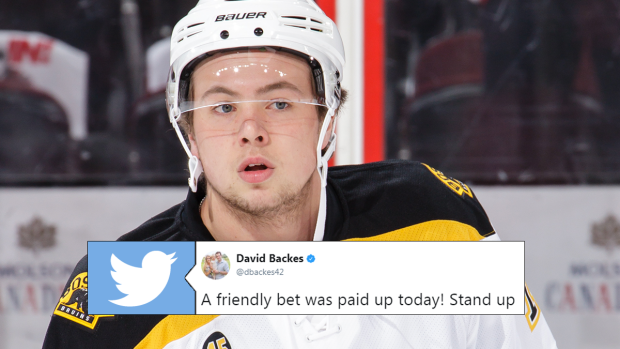 David Backes is heading into his second season with the Boston Bruins, but clearly he’s flexing some of his experience in league by making some savvy bets with the young guns on the squad.

Backes shared a screenshot on Twitter of a bet that he made with 19-year-old Charlie McAvoy. Backes attended Minnesota State U before he made it to the show and McAvoy was a standout at Boston University. The two teams played each other in a two-game series over the weekend and with three possible outcomes in the games (Sweep for either team or a split), there were three possible outcomes in their bet.

As you’ll see below, if Michigan State swept BU, McAvoy would have to clean up all the dog feces in Backes’ backyard. If the sweep went the other way, dinner is on Backers wherever McAvoy chooses. Finally the best one (We wish this happened) the loser on goal differential has to untie the other players skates for two straight practices.

Well, you’ll be able to tell who won that bet.

Realistically, cleaning up dog poo isn’t that bad of a punishment, but Backes does have some pretty big dogs.

It's #RememberMeThursday. Show me your rescue's pic to inspire more to adopt! #RememberTheRescue @HWAC @A4A_org pic.twitter.com/cVUTq5efft

The end result was definitely a surprising one, as Backes seemed to get the short end of the bet at first, with BU being ranked second in the NCAA before the weekend. They lost the first game 6-3 and got shutout 3-0 in the second.

Veteran move by Backes to find a way to get one of the rookies to clean up the dog poo in his yard.