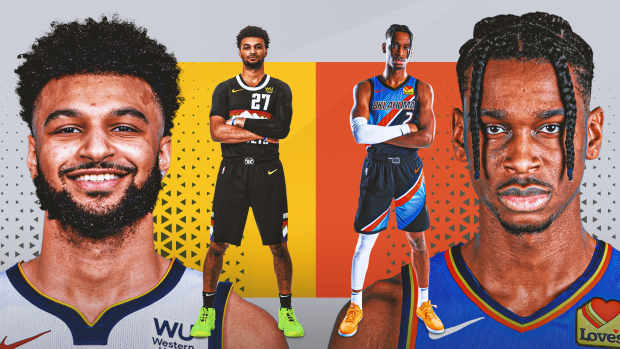 We’re still thinking about the Jamal Murray takeover from last year’s playoffs, and we’re sure that you are as well. With the current generation of young Canadian talent in the NBA, it’s hard not to get excited for the direction that things are going with the stars from up north.

It looks like Jamal Murray and Shai Gilgeous-Alexander will be in the All-Star conversation this season, and there are of course high hopes for other players taken early in the draft as well as some not taken at all.

With the impressive cast of Canadians dotting the NBA right now, we canvassed the league for five of the standouts so far.

After breaking out in the NBA bubble as a legitimate star, expectations are obviously high for Jamal Murray this season. The Denver Nuggets have stumbled out to a sub-.500 start through their first six games, mostly lacking on the defensive side of the ball, but Murray is averaging 22.2 points on 48.9 percent shooting from the field and 39.0 percent from three — all career-bests.

If this keeps up, he has a chance at a 50/40/90 season as Nikola Jokic’s running mate, and we only expect Murray and the Nuggets to get better from here.

With Chris Paul and Dennis Schroder out for the rebuilding Oklahoma City Thunder, Shai has the reins of this young team all to himself. His shooting percentages are down by just a bit, which is reasonable with a weaker supporting cast and more primary role in the offense, but he's averaging a career-high 6.7 assists to go with 19.0 points. He’s probably in line for at least a few triple-doubles this season, coming close a handful of times already.

Let’s talk about Shai’s backcourt buddy too! The undrafted rookie Luguentz Dort was a surprise in the playoffs and something of a cult hero for his defence against James Harden, although his jumper was clearly a work in progress.

His numbers are much better this season as a starter, and he's actually drilling the deep ball at a 45.5 percent clip on high volume to start the year. Dort has actually had one of the best single-game performances of any Canadian so far, drilling five threes in a 26-point game for OKC. He might be a legit long-term running mate for Shai.

Okay so, Andrew Wiggins' first few games of the season were pretty bad, and you might’ve seen some jokes around the internet rebranding Wiggins and Kelly Oubre Jr. as the Brick Brothers. Quietly, though, Wiggins has righted the ship and has played pretty efficiently for the Warriors after opening week.

His 40.5 three-point percentage would be a career-high easily, and while it's the sort of thing you might want to see for a little longer before buying in, it looks like Wiggins is fitting into his role playing off Steph Curry (so nice to have him back in basketball) and Draymond Green. He isn’t completely rid of the questions about his shot selection and playing style, but for the time being, things look good.

As the New York Knicks' new coach, Tom Thibodeau is relying on his starters for a heavy workload night in and night out, but although his counting stats are up, R.J. Barrett’s efficiency has gotten even worse from last year. His rates of 38.8 percent from the field and 21.6 percent from three are among the worst for anyone taking as many as shots as he does.

He's had a handful of really efficient 20-point games mixed in there and seems to have improved his passing vision with the ball in his hands, but for the most part, Barrett’s still a work in progress. The good thing is, he has lots of time.