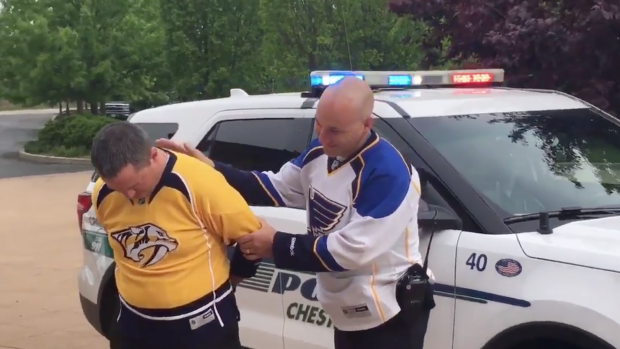 The second round of the NHL playoffs are finally here, and regardless of whether your team is still in it or not, it's exciting for all fans of the sport.

There are many storylines fans will be talking about during the second round.

One is obviously Crosby versus Ovechkin.  Another might be the fact that two Canadian teams are still in the playoffs and have a chance to win Canada's first Cup in 24 years.

Finally, the Nashville Predators are going to be a talking point because they turned many skeptics into believers with their first round sweep of the Blackhawks.

Pekka Rinne and the Preds will battle another Central Division foe in the second round, Jake Allen and the Blues, and ahead of the series, the Chesterfield, Missouri Police Department had some fun at the expense of the Preds:

Chesterfield is a city in St. Louis County, Missouri and a western suburb of St. Louis.

They've been cheering on the Blues since the playoffs began and this video is another funny example of their fandom.

From our Blue to your Blue, we all bleed Blue in the
Heartland of Hockey
LETS GO BLUES!@stlouisblues #stlblues #WeAllBleedBlue pic.twitter.com/MPFUGXcEuL

Nashville will have a chance to answer on the ice Wednesday night as Game 1 of the series goes down in St. Louis.