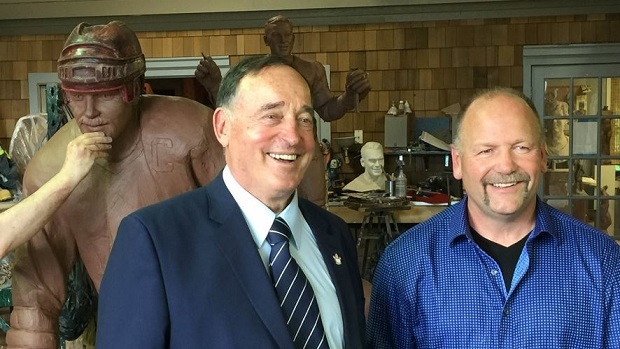 The Toronto Maple Leafs introduced Legends Row back in August 2014 as a way to honour past greats.

Ted Kennedy, Darryl Sittler and Johnny Bower were the first three members added to Legends Row back in 2014, and it’s now up to 14 people with the final statues set to be added ahead of the 2017-18 season.

On Monday afternoon, Wendel Clark and Frank Mahovlich took a trip down to artist Erik Blome’s studio to check out the early stages of their Legends Row statues.

Today, Wendel Clark & Frank Mahovlich visited the studio of artist Erik Blome to check in on the construction of their Legends Row statues. pic.twitter.com/UNImrIbIJB

Blome’s statues have been pretty spot on, so it’s no surprise that these two are continuing the trend.

Me & Darryl Sittler with the bronze I made of him for Legends Row in Toronto. #LegendsRow#DarrylSittler#TorontoMapleLeafs pic.twitter.com/k7OgVfh6I9