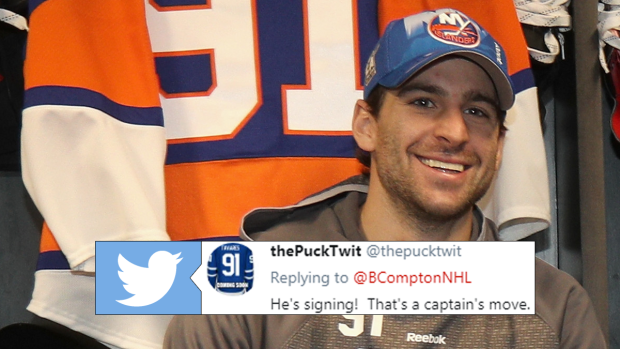 John Tavares is a class act, which is likely why we really won’t know anything too significant about his decision until it is made.

He is clearly going about his business in a respectful way, hearing out all sides and making his decision in private – however, it’s not like he’s locked himself in purgatory. Yesterday at Islanders minicamp, we found out at least two people have heard from him – the Islanders top picks in the 2018 draft: Oliver Wahlstrom and Noah Dobson

John Tavares reached out to Oliver Wahlstrom to congratulate him after the draft. #Isles

Noah Dobson says he received several texts from #Isles players after being drafted, including the captain.

While that really means nothing except Tavares is doing his job as a captain, many fans are thinking that he wouldn’t do that if he was leaning toward leaving long island. While everybody has been betting that he won’t leave New York anyway, we’re pretty sure this had nothing to do with that. It’s a kind thing to do and players text each other all the time, we’re sure even if he leaves New York he would still be willing to offer those two advice on anything ahead of their time with the Islanders.

Still, social media is a place of jumping to conclusions and that’s just what fans did.

does a guy with one foot out the door take the time to this ? hmmmm

Things your Captain does... #isles

gotta take that as a bit of a good sign, no?

Oddly enough this makes me feel the most confident about Tavares coming back. Is that weird? Lol