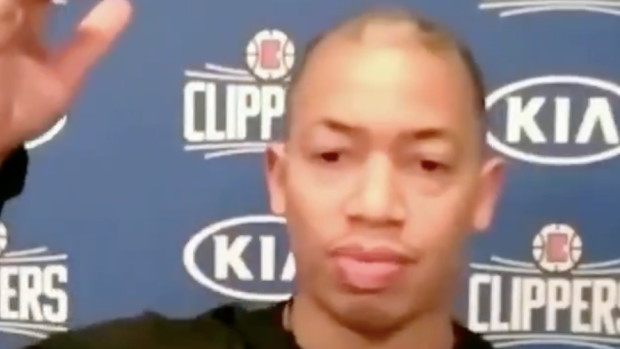 So you forgot someone’s name. It happens to the best of us, some of us are just not good with names! C'est la vie!

Well, today that someone was Tyronn Lue and he absolutely played off that situation like a pro.

During a press conference Tuesday afternoon, the Clippers' new head coach was talking to the media about Landry Shamet, the 23-year old the Clippers had sent to the Brooklyn Nets as a part of a three-team trade including the Detroit Pistons which landed the Clippers Luke Kennard.

Though unfortunately for Lue, he completely forgot the name of the guy they received in the deal.

It’s situation time for Lue, he has to act quick and be on his feet. What will he do!?

While scratching his head, chuckling nervously, and totally ~not~ appearing frozen up, Lue decided to derail the conversation by saying he wasn’t able to see the journalist he was speaking to on the Zoom video call.

We’re pretty positive our guy Lue flipped the script on purpose and that the internet connection and technology were all cohesively working, but you have to respect the hustle. That quick thinking is what a team truly needs in a coach. We’re loving the sly vibes Lue is bringing to the table...and  the press conferences.