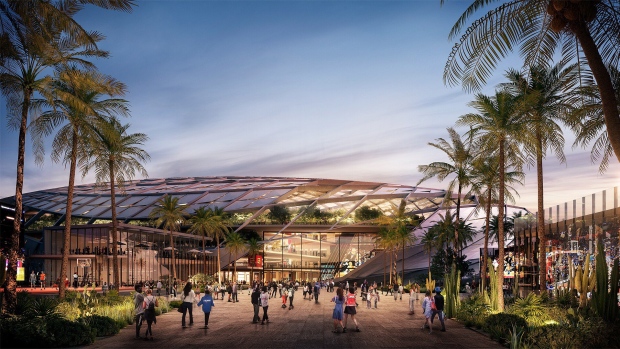 Now that Kawhi Leonard and Paul George are Los Angeles Clippers, owner Steve Ballmer is ready to revolutionize the team from an off-court perspective.

Bulmer and the Clippers announced the first renderings of the new arena complex in Inglewood, California that would give the team an exclusive arena to play in come 2024.

The privately-financed entertainment centre will include the team's business and basketball offices, a practice facility to go along with community and retail spaces.

A public outdoor basketball court will also be installed as well as a giant screen outside of the arena much like the Raptors have with Jurassic Park.

"My goal is simple: I want the Clippers to have the best home in all of sports,” said Ballmer. “What that means to me is an unparalleled environment for players, for fans, for sponsors and for the community of Inglewood. Our goal is to build a facility that re-sets fans’ expectations while having a transformative impact on the city we will call home.”

"Our goal is to build a facility that re-sets fans’ expectations while having a transformative impact on the city we will call home.” - @Steven_Ballmer pic.twitter.com/PwQeyNcUDi

When completed, the arena will sit next to the future home of the Los Angeles Rams and Chargers.

Solar panels and carbon offsets will also be installed to achieve net-zero greenhouse emissions. The arena will hold 18,500 seats, sit on 26-acres, and will be completely funded by Ballmer.

The Clippers lease at the Staples Center will expire in 2024.

“People, I think, will say, we play in the Lakers’ building,” Ballmer told the Los Angeles Times. “We’d like to play in the Clippers’ building. That’s what we’re working on.”