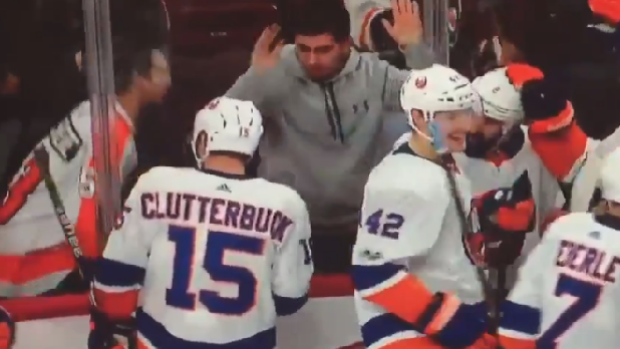 Cal Clutterbuck and a fans exchange words following the Islanders' 5-4 OT win over the Flyers. , yE/suv/Twitter

The New York Islanders walked away with a Black Friday win after defeating their division rival Philadelphia Flyers 5-4 in overtime at the Wells Fargo Center. Nick Leddy put home the game-winner after receiving a beautiful feed from Josh Ho-Sang with 2:16 left in overtime. With the win, the Isles improved their record to 13-7-2. 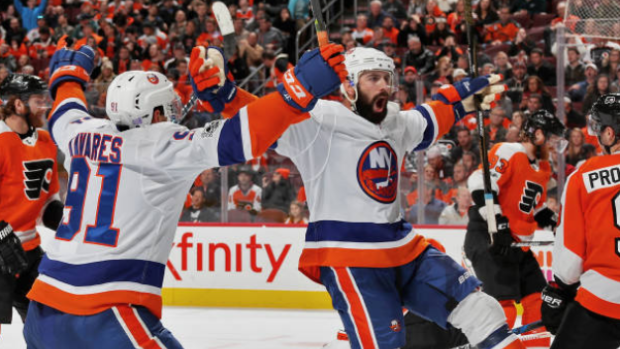 Following the goal, Islanders players surrounded Leddy to celebrate the victory. While they bumped fists and hugged one another, a Flyers fan in the area was yelling at the New York skaters. Fourth-liner Cal Clutterback acknowledged the chirping and decided to spit back a few of his own thoughts. It's unclear exactly what was said, but the conversation appeared to be pretty heated.

The following video is not suited for a working environment.

Flyers fans talking shit to Clutterbuck and he isn’t having it! #isles pic.twitter.com/cJ9P4zk1jZ

It’s not every game that we see players engage with opposing fans, but occasionally it will happen. Who could forget Steve Sullivan’s infamous back-and-forth during his days with the Chicago Blackhawks?

It’s rare to see any sort of physical fighting between fans and players take place, but once upon a time the rules were a little less strict. Some have historically taken fan chirping too far to the point where they've used their fists (or shoes) to take care of business.

Clutterbuck put home the game’s second goal and ultimately had the last laugh. Sometimes it’s best to just let things slide, but it’s always entertaining to see a player build up the courage to chirp back.