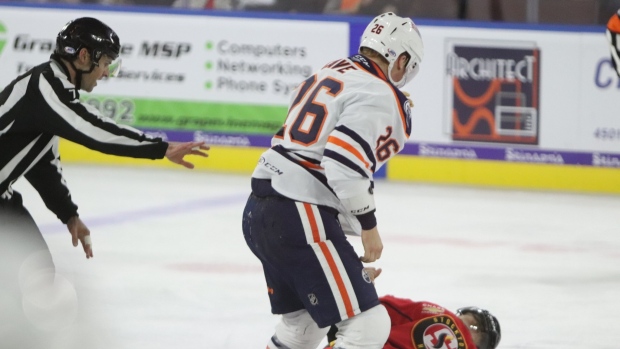 During the first period between the Bakersfield Condors and Stockton Heat, the two players got into a scuffle at centre ice. Moments into the fight after some early punches were exchanged, Cave, 24, caught the 19-year-old with a right hook.

Colby Cave with the KO in the AHL last night 😳 pic.twitter.com/BTiKJHbsO4

Pospisil was unresponsive was on the ice, as the Heat's trainer ran onto the ice. While the hometown crowd cheered, a growing concern mounted on the ice for Pospisil. Eventually, he was able to regain consciousness and was able to skate off the ice.

After the game finished, Cave reached out to send his best wishes to Pospisil, gaining the praise of the hockey world and Pospisil. Pospisil tweeted out the text message conversation and even made light of the situation by referencing a rematch down the line.

"What a great guy," Pospisil said of Cave. "I don't remember anything what happened last night…so that's good. Looking forward for rematch.

"You're a tough kid and I respect a guy that stands up for himself. Hope you have a quick recovery buddy," he wrote.

Hockey fans applauded Cave for his solid sign of sportsmanship and respect.

Shows that what happens on the ice stays on the ice. Class act by both players

Only in hockey and MMA would you see combatants reach out to each other like this.

🙃 Canadians are a different breed of man

Cave was sent down the AHL last week by the Oilers and has two assists in 2 games.

Pospisil, who's just six games into his professional hockey career, has been held pointless in six contests.