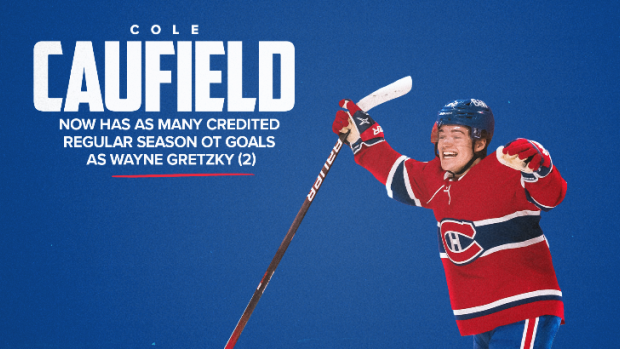 The wait in Montreal is finally over, Cole Caufield has arrived.

The skilled sniper has been waiting in the reeds for weeks, and he finally got to debut last week. His first NHL goal came in dramatic fashion, as it earned Montreal a 3-2 overtime win against the Ottawa Senators.

On Monday, Caufield found the back of the net again. For the 2nd straight game, his tally marked the OT winner.

Obviously we are not comparing Caufield to Gretzky, that would be outright ridiculous, but it’s just to hilarious not to point out. Overtime didn’t exist when Gretzky’s career first began, but it was introduced during the 1982-83 season.

Of course, scoring wasn’t quite as easy. 5-on-5 overtime led to more ties than decisions, and we’re sure he would have had a ton more in today’s NHL. Gretzky even has four OT goals in the playoffs, so it's not like we're trying to say he's not clutch.