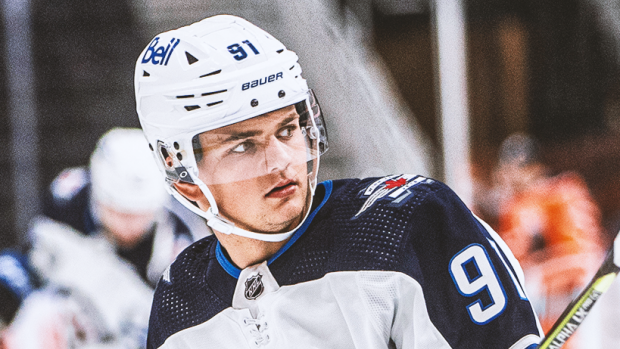 The headline speaks for itself, but we’ll provide a little more context nonetheless.

Cole Perfetti made his debut with the Winnipeg Jets on Wednesday during the team’s 4-1 loss to Anaheim. An NHL debut is special for the player, but it’s equally if not more special for the parents of a player. All the early mornings, the cold arenas, the mileage finally pay off when your child steps onto the ice with an NHL jersey on his back.

It’s a moment that every parent should want to witness live, but it almost didn’t happen for Perfetti’s parents Angelo and Sandra. They were trying to make their way down to Anaheim to watch the Jets away game, but the long lines at U.S. Customs nearly cost them the chance.

Luckily, a hero saved the day. His name is Gary Drysdale. Yes, there is a relation.

It was a sprint for Sandra and Angelo Perfetti to make it to Honda Center in time for their son Cole's NHL debut.

They had some help from Gary Drysdale, father of Anaheim Ducks defenceman (and Perfetti’s teammate at the 2021 IIHF World Junior Hockey Championship), Jamie Drysdale https://t.co/RNR9ZAkLYw pic.twitter.com/SE7cFDa99h

Perfetti and Drysdale played on the same World Juniors team for Canada, so there’s definitely a closeness between the players (and apparently the parents) there. How would you even go about holding up a plane, though?!