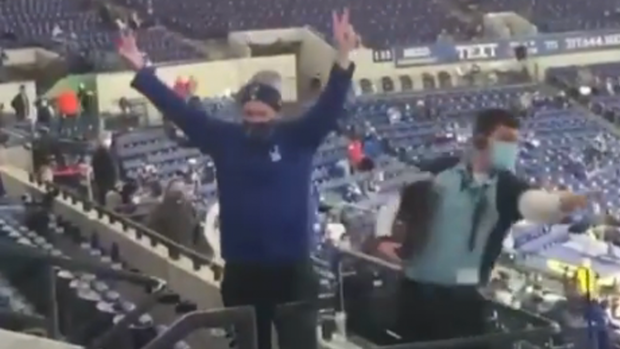 It was a tough day for the Indianapolis Colts who got absolutely pummeled by Derrick Henry and the Tennessee Titans on Sunday. The Titans dropped 35 points on the Colts in the first half alone, so it’s safe to say the limited fans that were able to attend likely knew it was over early on.

Perhaps that’s why this one Colts fan didn’t mind getting ejected from the game. After receiving a football in the stands, the fan managed to pull off a wicked spin move to circumvent the close guard of the usher and toss the ball back towards the field.

All the while, the fan was being egged on by the other Colts fans in the stands, who were chanting, laughing, and chirping at the usher.

That’s a heroic ejection if we’ve ever seen one. Obviously you hope that the football doesn’t hurt anyone upon landing, but overall this is an ejection for the PEOPLE.

The stands were basically empty anyway, the odds of something bad happening were much, much lower than a game in a different year.